Ready Player One takes place in 2044. In this near future, many of our current fears and issues have reached fruition. The world economy has never recovered. The environment has taken a turn for the worse. Unemployment has reached such an extreme that it can take years to get a fast food job. On the bright side, there is a free Massively Multiplayer Online RPG (MMORPG) through which you can escape this horrible reality. This MMORPG, called the OASIS, has become so prevalent, it is most people’s portal to the internet at large, and has even replaced most public grade schools.

Early on in the story, the creator of the OASIS (James Halliday) dies, leaving a startling provision in his will. The person who is the first to find a series of Easter eggs planted by the creator prior to his death will inherit his fortune, as well as full ownership of the OASIS. Wade Watts is one of the many young people caught up in this Charlie and the Chocolate Factory-esque fantasy. He becomes an egg hunter, or “gunter,” dedicating all his spare time to following the sparse trail left by James Halliday.

It is obvious that James Halliday is a bit eccentric merely based on the fact that the contents of his estate were left to the winner of a post-mortem treasure hunt. The eccentricity of the bequest is magnified by Halliday’s obsession with the 1980s. Growing up as a social pariah in the 1980s, James Halliday immersed himself in the popular culture of the day. He became obsessed enough with the culture that he wanted everyone to share in his interest and obsession. The intricacies of the Halliday Easter egg hunt are absolutely saturated with 1980s pop culture, causing a revival of the fashion and music in 2044 when his will was revealed on the international media.

Overall, I feel this book was really well done. I enjoyed reading it a lot. In fact, I read the whole book on release day. While something about the tone and word-choice made the book feel like a “first novel” to me, I do not feel like it significantly detracted from the experience.

If you enjoy 80s popular culture and/or near-future dystopian science fiction, I would highly recommend this book to you.

I enjoyed Ready Player One so much, I wanted to share that enjoyment with other people. I am giving away 1 hard cover copy. To enter this giveaway, please comment on this blog post describing your favorite memory from the 1980s, or from your experience with 1980s pop culture. I will choose number the comments, and choose the winner via random number generator Monday, September 12. Multiple comments from the same person will count as one entry. Please include in your comment a way for me to contact you so if you win, I will be able to communicate with you regarding shipping details. 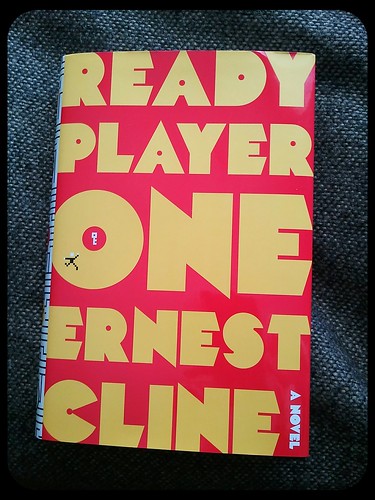 The Spoiler-Filled Section of My Review…

What I Enjoyed (few to no spoilers)

80s References
While I was not born until the tail-end of the 80s, I am still fairly familiar with 80s pop culture. Recognizing songs, games and movies from that era was fun, and the exuberance that is obvious in the characters sharing these 80s culture-related experiences is wonderful to read. I am sure others will get more of the pop culture references than I did, and will therefore get more out of it. I do not think being familiar with 80s popular culture is imperative to enjoying the book, however. If you explore the culture of the 1980s along with Wade, I think it would be a really rewarding experience.

Viewing Video Games in A Positive Light
Too often in popular culture today, it seems that video games and other digital media are scorned, and sometimes even seen as unhealthy. It is refreshing to see video games and other media (not all digital) being portrayed positively, and even venerated. The downsides of using a virtual world as an escape are definitely mentioned, but the benefits of a virtual world are highlighted as well.

The Setting
The novel is set barely more than 30 years in the future. That is easily within my projected lifetime. Reading about a dystopian possibility for my future is both horrifying, and oddly pleasing. It is interesting to see the current status quo brought to one of its more negative outcomes. People have turned to renewable energy, but it is too late, and our children are paying the price for our parents’ stubbornness. We get a few glimpses into the experiences of people who grew up during the 1980s and 1990s with wealth and plenty in the first world, only to see that deteriorate before their eyes in 20-30 years. I do not see a logical way for Ernest Cline to set another book in this setting, but I would definitely be interested to see the setting developed further if he do so.

Audio Book Narration
One of my favorite actors and authors, Wil Wheaton, narrates the audio version of Ready Player One. I have only been able to listen to the sample clip, available here, but it is obvious that Wil does a fantastic job, and has a lot of fun. At some point I definitely plan to pick up an audio version. At $22.50, it’s about the same price as the hardcover, which is a steal.

Over-Explanation
One of the things that bothered me while reading, particularly during the first few chapters, is that Ernest Cline almost over-explains a lot of things, making the novel’s flow stutter. He goes into some depth describing the significance of some of the earlier 80s references, as well as acronyms/abbreviations like MMORPG. I am not sure how he could avoid a lot of this, however. It seems clear that the in-depth explanations of things that may already be familiar to many readers are intended for those who are not as familiar with 1980s popular culture, or with video game and computer abbreviations. Including these explanations (hopefully) allows greater accessibility to a wider audience. I just wish there were a way for it to feel less awkward.

Teen Romance
While it includes high school age characters, Ready Player One generally avoids fulfilling the negative stereotype of a young adult (YA) novel. By this I mean that it concentrates on the characters’ motivations and actions without dwelling on their youth overmuch. What I see as a negative stereotype of YA novels is that they can focus too much on what it means to be a teenager or young adult, sometimes even making the characters seem younger than they actually are, as well as alienating people who do not feel a part of the young adult group. I feel like Ready Player One begins to cleave to the negative YA stereotype whenever it explores the romance between Parzival, Wade’s online persona, and Art3mis, the online persona on whom he as a crush. Wade, who is portrayed as intelligent and driven, becomes obsessed with Art3mis, and nearly completely disengages from his previous goals. Maybe I am unfamiliar with the motivations of the young adult male, or perhaps the transition into Parzival’s feelings for Art3mis was too abrupt, but it seemed out of character for Wade, and I did not feel like the romance added a whole lot to the book.

Aech’s Reveal
Aech is probably my favorite character. Successful in the OASIS as a tournament fighter, and thus monetarily successful in the real world, Aech is a great friend and rival for Wade. I love their banter, and watching their relationship change and grow. Close to the end of the novel, Aech is revealed to be an African American female, rather than the Caucasian male her avatar implies. The back story about her mother not accepting her sexuality, her hacking into the system to fraudulently portray her school avatar, and her ability to constantly travel the country are not as fleshed-out as I would like. In fact, the end of the book feels fairly rushed, as though there had been a lot more story that somehow had to be boiled down for the sake of time. I would have liked for her true identity to be revealed a little earlier so we could learn more about her, and so we could see how her and Wade’s relationship grew and changed in this new light. In the rush to the end of the novel, Aech’s story seemed tragically abbreviated.