This week’s food club theme was actually a challenge: make a dish to bring that you can create for under $5. We were given some flexibility: items that you already have on hand count for $0.

I decided to make a super easy cake recipe that we called “dump” cake growing up. The idea is you take all your ingredients, dump them in a baking dish, bake them, and viola, you have a cake!

1 box yellow cake mix (you can make your own, but most of the point of this recipe is that it is quick and easy)
1 stick of butter (unsalted)
1 can of fruit 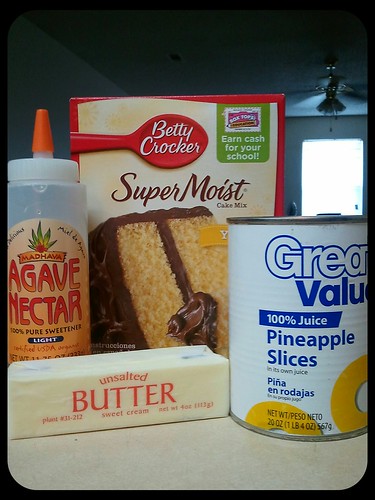 While you can literally dump everything into a baking dish and bake it, I try to make my ingredients a little more homogeneous, partially so I don’t end up with big sections of dry powder. The pineapple juice actually helped with this a lot. I also sliced up the butter and distributed it relatively evenly throughout the dish. 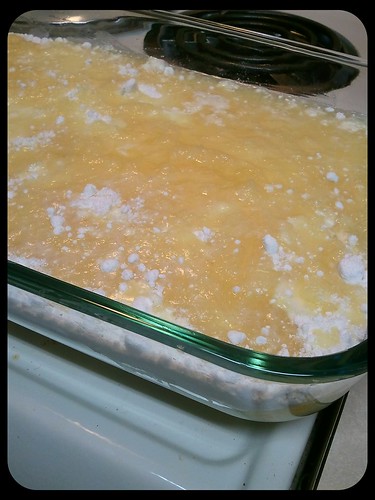 You can see that while I’ve tried to evenly distribute the ingredients, I haven’t bothered to actually mix them together. There is still dry powder, it’s just not all in one spot.

Follow the instructions from the box of cake mix you used (or from the cake mix recipe you used if you made this from scratch). I think I baked mine at around 375F for 30 minutes.

It isn’t intended to be a pretty cake, but if you’re craving buttery, sugary, cakey goodness, this is a quick way to fulfill that craving! 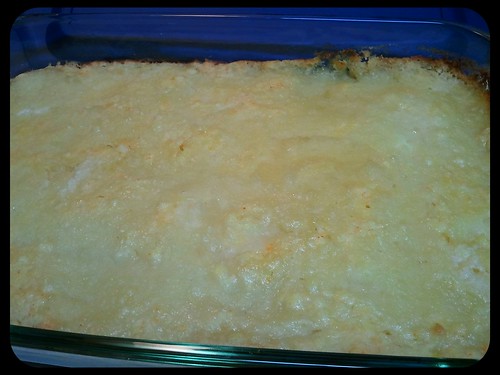 Note: Adding the agave nectar to thicken the juice seemed to work well. I thought I was going to use only half the juice in the can, but I ended up including all of it. I did crush the pineapple a bit with my blender — I did not include the rings whole. This helped me spread it through the cake mixture a lot more evenly, but I don’t think it was absolutely necessary.

Regarding cost: I already had everything I needed, so in the context of our food challenge, I used “$0.” If you were to buy all these, I still think you could make this cake for under $5. The agave nectar is the most expensive part. Most places I looked are selling bottles like the one I have for a minimum of $5 by itself. You can avoid this expense by substituting sugar (dissolving it in the juice before distributing it), substituting honey (though I’m not sure how much this would affect the flavor/texture since it’s thicker), or by using canned fruit suspended in syrup. Most canned fruit can be found for between $0.50 and $2.00. A box of yellow cake mix can run from about $0.75 to $2.50. Butter I saw ran about $2 a pound, or $0.50 per stick. Especially if you specifically budget the ingredients, you can make this cake very affordably. 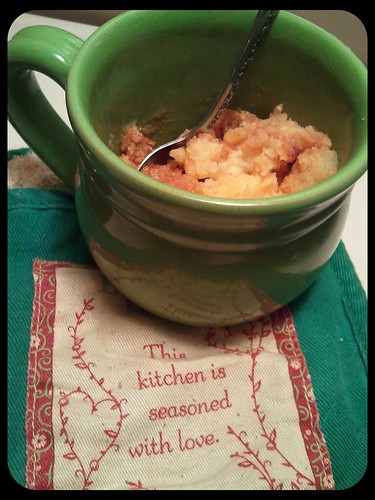