This Friday, I made spinach lasagna rolls. I mostly went off SkinnyTaste’s Spinach Lasagna Roll recipe, but I did tweak a few things: I used fresh spinach, and I used full fat ricotta. I chose to leave off the Parmesan (I find it makes food to salty for my taste), and substituted a cheese blend for the “part skim mozzarella.” I chose to use a pre-made sauce instead of following their recipe (though I think in the future, I will try to make my own sauces, though not necessarily the one from SkinnyTaste). Finally, in spite of the recipe saying it made filling for only 9 rolls, I ended up having enough filling for 11 rolls. This means the nutrition facts shown in the recipe are off a bit from what I made.

My take on the recipe:

I started by boiling the noodles, and chopping and wilting the spinach.

Next, I combined the egg, ricotta, salt, pepper, and spinach in a bowl: 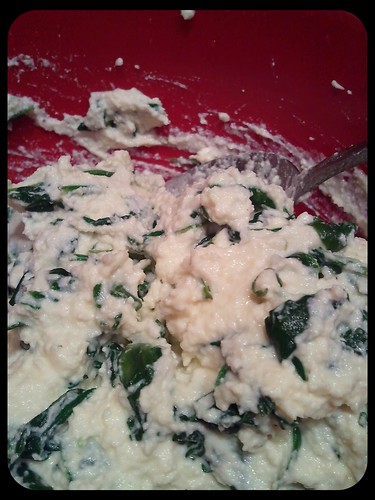 I laid the cooked lasagna noodles on a clean kitchen towel to allow them to cool and dry slightly. I would make sure you don’t under cook the noodles too much, or it’s easy to break them when rolling the noodles (I broke one completely, and part of another).

After the noodles were cool enough to handle, I spread ricotta mix on them. I did not measure out a 1/3 cup like the recipe suggested, so that may be why I ended up with filling for 2 extra noodles. Additionally, I realized I did not have wax paper on which to fill and roll the noodles, so I just used a flexible plastic cutting mat: 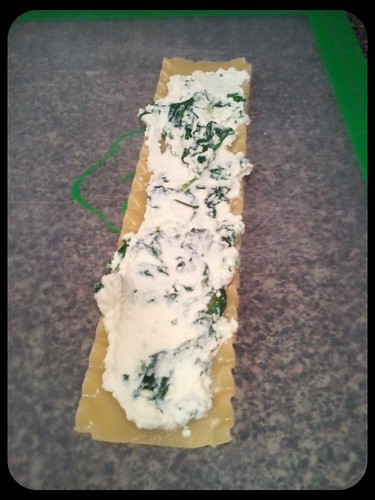 I gently rolled the noodle, careful not to roll it too tightly: 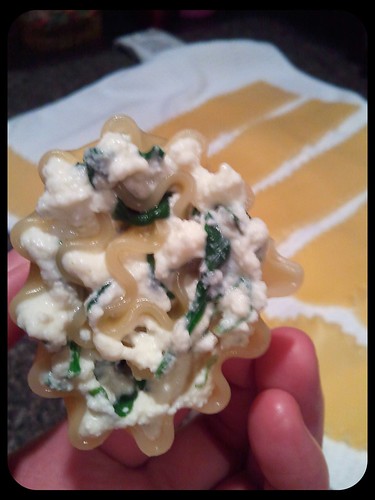 As the recipe suggested, I ladled somewhere around a cup of sauce into the bottom of the baking dish, and after placing the rolled noodles seam-down in the dish, I ladled more over the top. I think I ended up using a lot of sauce, even though it ended up being a little over a third of what the recipe originally called for.

Finally, I sprinkled a small amount of the shredded cheese on each lasagna roll, and baked in the oven at 350F for 40 minutes. I am not sure why it takes so long to bake, but it turned out well after that length of time. 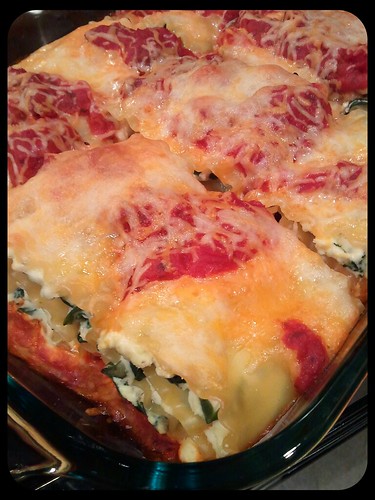 Pam was kind enough to bring over dessert, so we had a bonus last night: strawberry angel food cake! 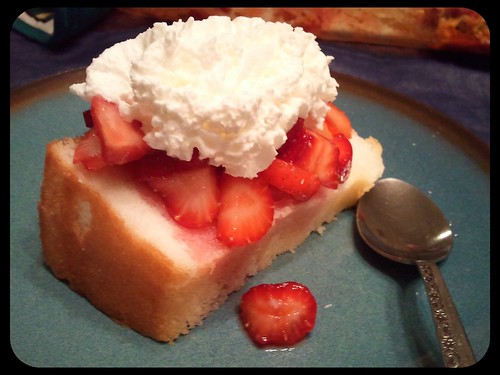