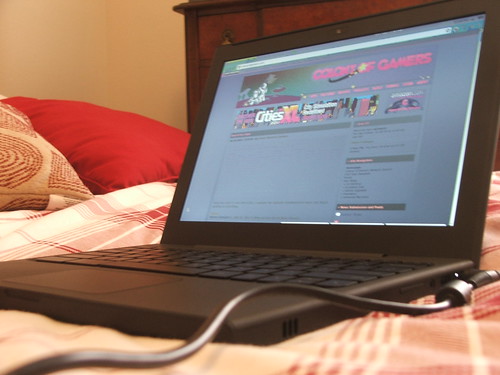 I got my Chrome notebook December 16, 2010. It’s taken me a couple months to figure out what I want to say about it. I try to be as fair and informative as possible in the review, but I’m always excited about new gadgets, and getting a surprise computer in the mail for free is incredibly awesome. Just a note on what may color my thoughts on the Cr-48. If anyone has questions, feel free to ask in the comments.
Hardware

General Look and Feel
I love the matte black look, and the soft feel of the outside of the Cr-48. The keyboard and individually spaced keys feel really good. The tactile feedback is nearly perfect to what I would want. It’s kind of annoying using other keyboards when I’m not using my Chrome notebook because they just don’t feel as good. I don’t find the track pad to be as frustrating as a lot of other people seem to find it, but I would say that it’s the most obvious weakness of the exterior hardware. 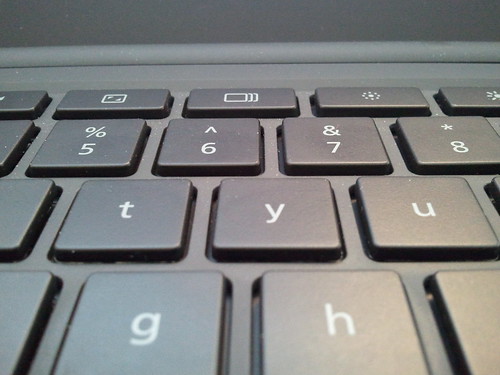 Keyboard
I like having the screen brightness buttons (I also like the degree to which the screen can dim; my Acer Aspire One seems to have a very small range of screen brightnesses, all of which seem really bright to me. Comparatively, the Chrome notebook is much more customizable. Not having function keys is a little weird. I’ve had to relearn a couple keyboard shortcuts (for example, I usually use ctrl+F4 to close tabs, but now I use ctrl+W). I don’t have an issue with the CAPS LOCK key being removed, but I sometimes accidentally hit the search key, which opens a new tab, interrupting whatever I was doing. I don’t really use the back and forward buttons much, but I think they make sense on a web-centric computer. I miss having a page up, page down, home and end buttons. I never really use the trackpad to scroll through anything, so not having buttons that ease my webpage scrolling is a little frustrating. I know there are some key combinations I can use instead (alt+up, ctrl+alt+up, etc.), but it doesn’t feel nearly as intuitive or straight forward as I’d like. Having the power button essentially integrated into the keyboard is a bit confusing. I find myself hitting it when I’m meaning to hit backspace or delete (I usually use both backspace and delete, and since this keyboard only has a backspace button, sometimes I’ll hit the power button instead). Fortunately, I usually only just tap it, so I haven’t ever accidentally shut down my computer or logged out unintentionally.

Capabilities
The Chrome notebook seems to process video just fine. I often use it to watch Hulu and Amazon Video on Demand, with no issues other than connection ones that seem more closely tied to my internet speed than anything else.

I’ve only tried using the built in SD card slot once. I was disappointed it wasn’t a universal card slot (or at least, I couldn’t stick an old XD card in there successfully), but SD seems to be the main standard at this point anyway. I couldn’t get the computer to automatically notice I’d plugged anything in when I put in the SD card, or when I put a flash drive in the USB port. I’m not sure what the SD slot would be used for if the computer doesn’t notice anything is in there, so I’m not sure if that was an issue with my computer specifically, or if the hardware just isn’t being fully utilized right now (or I’m failing to understand how to use it).

The only other thing I used the USB slot for was to plug in a mouse. It worked as expected. It bothers me that there’s only one USB slot, but I honestly haven’t even used it other than experimentally, so I’ll have to assess my feelings over the long term.

The headphones port works adequately. It gives an alternative to the built-in speakers (which aren’t bad, but are still on par with built in speakers on other laptops). The high-pitched squealing noise issue when playing sound is an issue with both the built-in speakers and when using headphones. Though this issue supposedly stems from changing the volume, I’ve experienced it additionally when not changing the volume at all.

The built in microphone is serviceable. You don’t have to lean in close to use it, you can just speak from wherever you’re sitting. There seem to be some feedback issues with it (odd, sonar-like sounds, even when echo reduction is turned on).

The camera is exactly what I’d expect from a webcam built into a laptop. It seems to be better than the webcam on my Acer Aspire One, but it’s not particularly noteworthy.

I haven’t messed with the video-out at all. I would be interested to see other people’s experiences with it.

I’m pretty much exclusively on wi-fi for my internet access. There have been intermittent connectivity issues, but no different than I’ve experienced on other laptops. The only issue is that everything I use on this computer is web-based, so even a small blip in connectivity is frustrating (leading me to have to restart video calls, for example). I’ve had limited experience with the Verizon 3G. I tried setting it up on multiple occasions (on the highway in Kentucky, in a hotel in Oklahoma City, and at home in Arkansas), and only succeeded on my 6th attempt. Once it was set up, it seemed to work fine. I think it’s awesome that a small amount of free 3G is bundled with the computer for 2 years.

Built in
The built in software feels exactly like Chrome on any other computer, but lacks a traditional “desktop.” Depending on what add-ons and theme you employ, they will automatically import, which contributes to a seamless experience. Last Pass, for example, will automatically load in when you first use your Google account with the notebook if you normally have it on your Chrome browser (such was the case for my dad, at least). 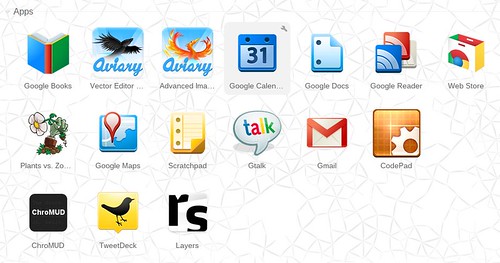 I don’t use many of the apps from the Chrome store, though I’ve downloaded several. Most of the apps seem to be shortcuts to other things rather than apps (particularly the Google ‘software’ ones), but I suppose it helps some people feel they have a corollary to a more traditional “desktop.” It’s cool you can get little browser games, but those types of games generally don’t appeal to me personally. There are some light programming/compiling tools available, which is nice, but there weren’t really any web apps that stood out to me as being excellent. Generally I use gmail as my anchor point, anyway, so I generally access the other Google web apps through there rather than through the new tab page.

Frustrations
I find it frustrating that there’s no java support in Chrome OS. It means I can’t play Minecraft, among other things. Additionally, I am unable to watch my Netflix streaming shows/movies (I believe because of lack of Silverlight). These two things draw me away from my Chrome notebook because I can only access them elsewhere.

This seems like a computer that would be useful for students and teachers alike. If it worked well with an external monitor or projector, I can see it becoming a classroom staple. (With accounts not being tied to hardware, this seems even more ideal for an educational setting where the students/teachers may not actually be able to own the hardware, but only be able to borrow it from the school.)

Another great trait that would serve students well is the long battery life. I’ve had my battery last upwards of 8 hours with light internet usage. Even when constantly watching videos, the battery lasted around 6 hours for me. Having such great battery life would make this an ideal note-taking computer in college. I would certainly have loved to have a computer like this when I was still in school.

Other Strengths and Weaknesses 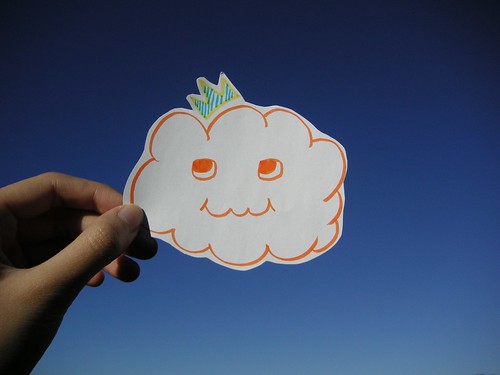 The Cloud
Obviously, the main strengths and weaknesses of the Chrome notebook are tied to the cloud. I’ve already mentioned the positive implications for education and educators using a device like the Chrome notebook. Having one’s digital identity and documents not tied to the hardware being used can be both good and bad. It’s great because if something bad happens to the hardware (corruption, destruction, theft, etc.), it is far more simple to recover everything you need. However, the downsides shouldn’t be ignored either.

If the hardware is less important, I fear it encourages the current mindset of the disposability of technology. Already cell phones, computers and other e-waste are filling our landfills and poisoning our groundwater. Devaluing the hardware further seems like it would encourage people to continue to not only dispose of electronics improperly, but also to dispose of them even more often.

An additional downside is the need to trust in both the cloud host provider and in the internet service provider(s). Because I’m already using Google’s web services such as Google docs, I’ve already put my trust in them. As we depend more on the cloud, they’ll need to not only be reliable with privacy, but also with server maintenance and lack of data loss. Regarding internet service providers, if none of my information is physically stored on my computer and the ISP denies me access for whatever reason (perhaps they want to throttle traffic to Google, or perhaps they were shut down by the government like in Cairo), I’ve completely lost access to all my information. In this latter case, I feel like a hybridized model would work better. If I had a local copy of everything as well as a copy in the cloud (think something like synced video game saves on Steam), I would feel much more comfortable.

Solid State Drive
In the Chrome notebook, I see all the positives of a solid state drive. The machine boots unbelievably quickly. It runs very quietly, and rarely needs to run a fan (though I’ve heard its fan running when I have the notebook in bed and it gets a little warm due to the blanket restricting airflow or something).

Wrap-up
Overall, I find the Cr-48 Chrome Notebook to be a fantastic device, with particular appeal to students and educators. I’m loving my experience with it so far, and am excited to see what changes and improvements Google makes in the future.

Stickers
One silly complaint I have is, because I was in the first wave of recipients, I did not receive any stickers for my Chrome notebook. Apparently recent recipients have gotten colorful stickers. Eric of Erratic Gamer (also known as Ravenlock of Colony of Gamers) was kind enough to allow me to share his picture of his Cr-48, generously laden with stickers: 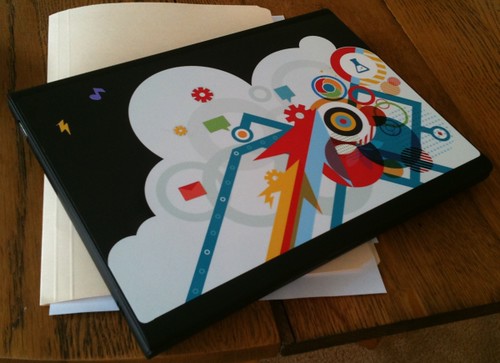 chevron_left Hot Dogtopus
An overview of my week, in pictures chevron_right