More snow. It seems I’m always talking about snow on this blog. Bizarrely, though the picture below looks a bit dark, it was blinding outside when I took it. 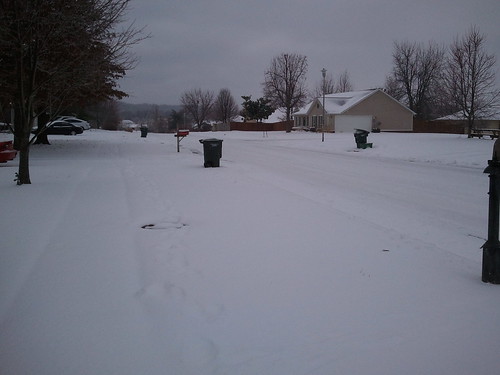 Apparently I cook a lot when I’m snowbound in my home. I made some brownie mini cupcakes. 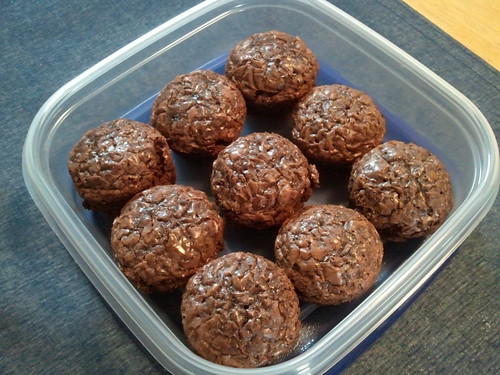 Most of which I packed up to send to my boyfriend for Valentine’s day. (While I like baking sweets, I tend to burn out on eating them really quickly. Feel free to take advantage of this by getting me to bake things, than taking all the leftovers.) 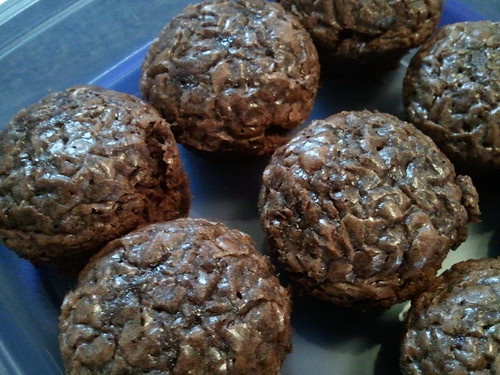 I made oatmeal dark chocolate chip cookies for him as well. 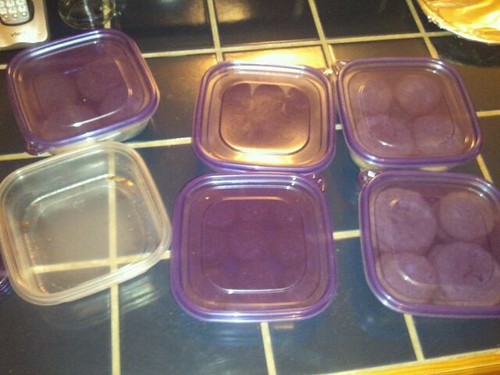 I noticed I had some pizza crust mix in the pantry that I had planned to try out months ago, so I made pizza with some canned tomatoes we got from my grandparents’ neighbors around Christmas, red bell pepper, spinach, shrimp and “fiesta blend” cheese. 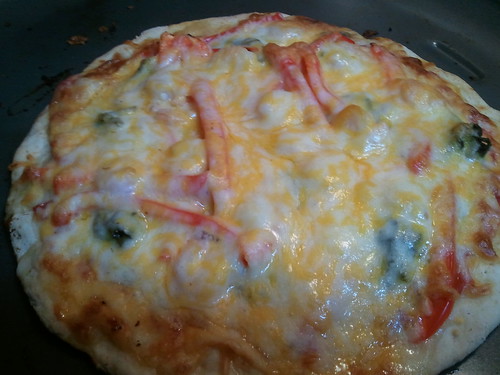 I also made pasta with pretty much the same ingredients (plus Italian seasoning and radiatore) which I had for lunch a couple days. 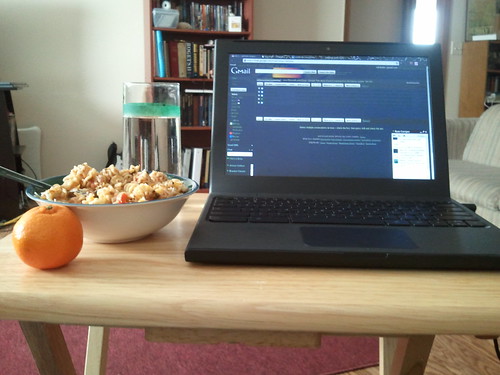 I came to the realization last night that my road was a little scarier than other people’s roads when I invited Maggie, Marisa and Brandon over for a Doctor Who night, and they informed me of this fact. Alas! I’m really excited because we finished the new season 1, and watched David Tennant’s first Christmas special. I really hope everyone enjoys David Tennant as the 10th Doctor.

Thursday I got to spend a large chunk of the day with Kes.  We walk/jogged about a mile and went out to Taste of Thai.  I then took advantage of the Dr. Who audioplays he got my for my birthday on the drive to my parents’ house (I listened to 3 out of the 4 discs).

The audioplays are a couple of the ones read by David Tennant, placed during the time period when he played the Doctor.  One of the two is from when Donna Noble was his companion. Tennant is a fantastic reader.  He reads in his natural Scottish accent, modifying accents when he speaks for people.  He does a pretty good job for Donna, and of course the Doctor sounds perfect.

I doubt visiting my parents will ever be particularly restful physically speaking.  I’m definitely trying to be more active (hence the walk/jogging twice this week already), but my progress is pretty slow.  Yesterday, my mom and I walked (with a short burst of jogging in the middle) four miles.  Whew.  That’s a lot more than I’m used to dealing with.  We also did some boxing-esque free weight exercises, as well as ab exercises.  I was pretty exhausted afterward since I’m so out of shape.

During my Thursday and Friday walks, I wore my new Pokewalker that Tim got me for my birthday.  I plan on playing around with it, as well as with Pokemon HeartGold a bit more, then posting my overall impressions.  First impressions are pretty good.  I didn’t get to play Pokemon growing up (except a tiny bit of Red, I think on a school field trip), so I’ve only played Pearl previous to this one.  It’s cool seeing a bunch of Pokemon I remember my friends talking about when I was younger.

We then went to a baseball game, and I dozed off.  Bad idea:  my mom and I had not heeded my dad’s suggestion to wear sunblock because we forgot a bottle at the house and didn’t want to head back to get it.  I now have a bizarre sunburn that is only on part of my arms, neck, and chest.  I was wearing jeans, so my legs are still pearly-white.  Blech.

Hopefully, we’re going to pick up some plants at the nursery today to plant for Mother’s Day.  I think we’re going to have our Mother’s Day picnic today rather than tomorrow because there’s a pretty high chance of rain tomorrow.  I’m still not sure what food we’re planning to have on the picnic.  We discussed shish kabobs a little bit, but don’t want to take a grill with us, and don’t think they’d travel well if we made them beforehand.  I’m not a huge fan of sandwiches, but we’ll see what we end up doing.  I think the main food we’ve definitely decided on is spinach dip; delicious!

Dr. Who and PAX East

I’m still devouring Dr. Who.  David Tennant is amazing.  I can’t believe he’s wanted to be the Doctor since he was 3.  Imagining that kind of dedication, to a goal, to his craft, is beyond me.  I admire him greatly (and am a bit celebrity infatuated).

Speaking of celebrity infatuation (I guess I’ve been having that a lot more lately), Kes and I are watching Repo Men tomorrow.  I’ve heard mixed things about it, but I would like to see what more Jude Law can do.  I’m pretty sure the only things I’ve seen him in are Sherlock Holmes and Gattaca, and I’d like to see more.

I’m slightly disappointed there was no chance of me being at PAX East this year.  I missed out on Wil Wheaton’s keynote (possibly more celebrity infatuation; geekiness is great and attractive, even if you’re “just” a geek), which I’m sure was amazing.  I also missed out on a chance to see wonderful friends.  I hope the experience is marvelous for everyone.  This past fall, I loved PAX, and I’m sure PAX East will be fantastic.