When I saw Sweetapolita’s Dark Chocolate Raspberry Buttercream Cake, I knew that was what I wanted to make Ryan for Valentine’s Day. I was trying to be ambitious because I have made few cakes from scratch, and no icing. However, I knew I didn’t want to be over-ambitious and set myself up for failure. I thought the Swiss meringue buttercream in the original recipe might be a too challenging for my first frosting, so I found a generic buttercream frosting recipe, knowing I would add fresh raspberries. I also did not follow the original recipe for the cake. When I mentioned to Ryan that I wanted to make him this cake for Valentine’s Day, he balked at the inclusion of coffee, in spite of my assurances that he wouldn’t be able to taste the coffee. I tracked down this coffee-free chocolate cake recipe and decided I liked the idea of making my first two layer cake since the recipe makes two 9-inch cakes.

I followed both the chocolate cake recipe and the buttercream frosting recipes exactly, though I doubled the frosting recipe since it says it will only frost one 9-inch round cake. I found that a single batch would have easily frosted my 2-tier cake, but was able to use the leftover frosting the next day when I made essentially the same cake for a food day at work.

I combined the following dry ingredients and just allowed the stand mixer to run on its lowest setting with the paddle attachment: 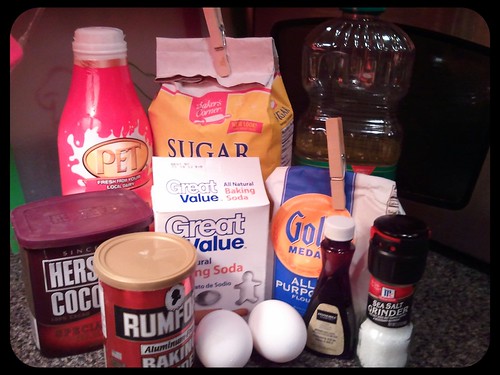 Next I slowly incorporated all the following wet ingredients while the mixer was running, adding the boiling water last:

2 eggs
1 cup milk (I used whole vitamin D milk)
1/2 cup vegetable oil (I used canola)
2 teaspoons vanilla extract
1 cup boiling water (I just boiled it in the kettle while the dry ingredients were mixing, then poured it straight from the kettle to the mixer)

The batter is very runny, but makes for a very deliciously moist cake.

I had read somewhere (maybe on Sweetapolita?) that one should use parchment paper to line cake pans. I did so, and it was great for clean-up, but the edges of the cake were deformed by the parchment paper. I’m not sure if I could have avoided this if I had folded the edges to fit the pan or not. The cake did not stick to the parchment paper much at all, so I didn’t have any issues with the cake breaking, so that was a relief.

As the recipe suggests, I cooled the cake in the pans for about 10 minutes, then transferred them out of the pans and onto a cooling rack.

Once the cakes were cooling, I began working on the frosting. Making a double batch in my mixer may have been a mistake due to volume. I had to take about half the mixture out, and then slowly reincorporate it. I’m still not sure if I was able to get the texture right, but the flavor was good.

A single batch is 1 pound of softened unsalted butter and 2 pounds of confectioners/powdered sugar, plus a pinch of sea salt, a Tbs of vanilla extract (I did not use the clear vanilla extract the recipe suggests), and about 6 Tbs of milk/cream (I used whole milk). 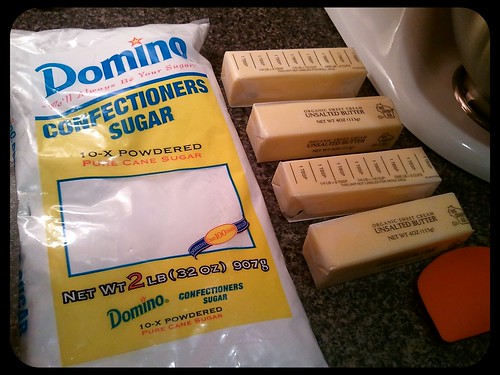 After the frosting seemed relatively acceptable, I added about 6 oz. fresh raspberries to the double-batch of frosting. In spite of the small amount of fruit, the frosting ended up very pink and flavorful. In spite of thinking that more fruit would be needed, based on my experience, I don’t think you need more unless you want a stronger flavor/different consistency (thicker). I’m also uncertain why a lot of recipes recommend adding pink food coloring as the frosting was already very pink. 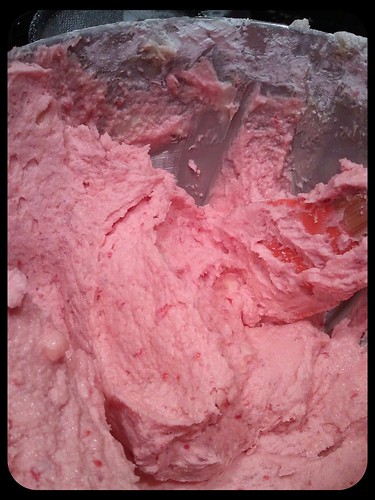 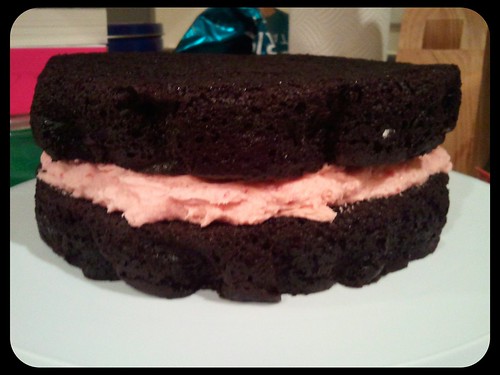 The cake didn’t end up quite as lovely as I wanted, probably partially due to my non-expertise and practice at frosting cakes. However, I wanted something a little nicer than a sickly pink cake to give Ryan. Additionally, the thick frosting gave no clue as to what kind of cake was underneath, so I wanted to hint at the chocolate cake within. I decided that a heart made of fresh raspberries and dark chocolate chips would suffice, and was pleased with the result. 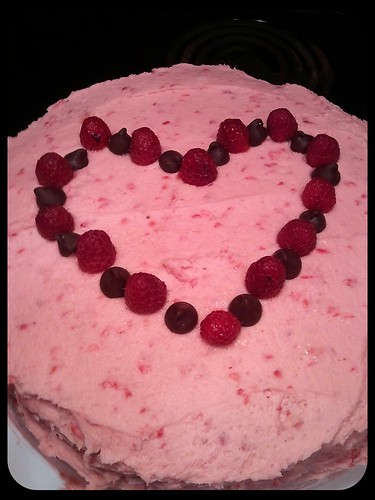 Having never made a layer cake myself before (I think I helped my cousin make one once), I was incredibly excited that I was able to clearly see the layers after cutting into the cake. 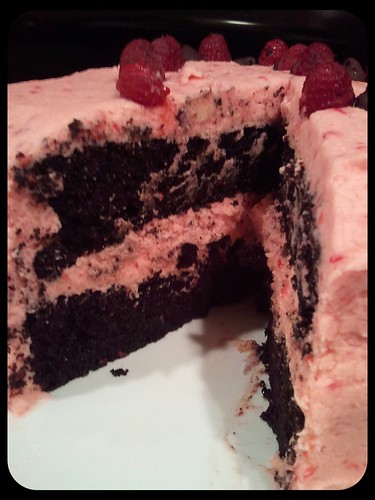 Overall, I was incredibly pleased with how the cake tasted. The cake itself was very moist, and the frosting wasn’t as sweet as I feared with all those pounds of sugar in it (I think the raspberries helped a lot here). I would definitely like to make improvements in the future on my presentation, and when I made the cake again for work, I used less frosting which I think was a better flavor ratio for me (as I’m not a big frosting fan).

This Friday, I went off another recipe from Skinny Taste, this time for “Asian Chicken Lettuce Wraps.” As usual, I made a lot of changes.

1. Combine ground chicken, shitake mushrooms, and celery in a bowl.

2. Begin heating 1-2 Tbsp of sesame oil in your pan (I used a kawali (Filipino wok), but any wok or frying pan should work well) using medium heat.

4. Pour the sauce over the chicken mixture and allow to marinate for at least 10 minutes.

5. Carefully transfer the chicken mixture to the hot pan (it may pop and sizzle a bit from the moisture).

6. Brown the chicken mixture, incorporating the remaining ramen seasoning and black pepper as it finishes cooking.

7. Serve the chicken and fresh vegetables, allowing people to add the desired amount to their romaine leaf.

8. Add any sauces you enjoy, such as Sriracha sauce.

9. Wrap the leaf around your filling and enjoy! 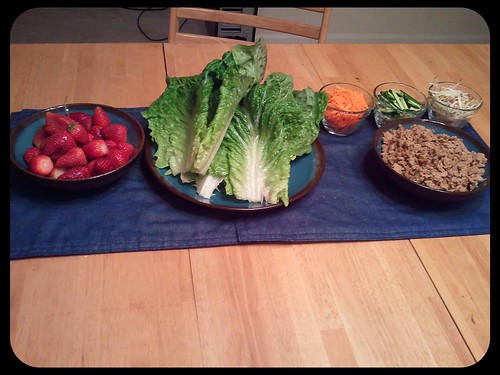 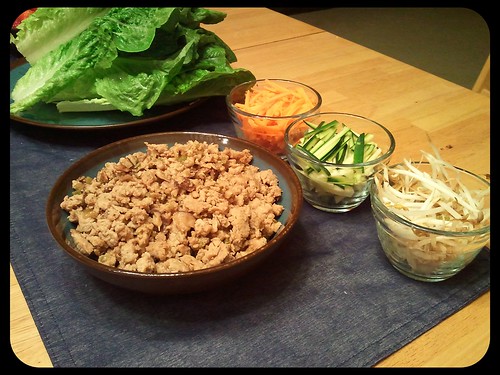 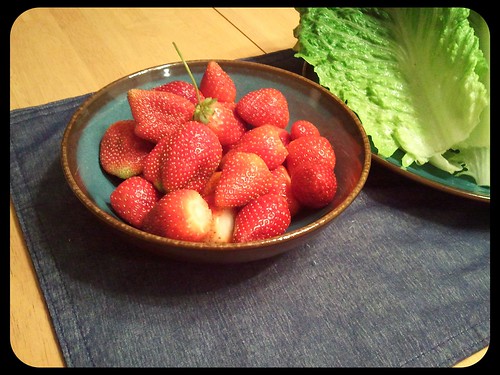 I originally found the idea for Nutella “ice cream” here. I wondered what it would be like if I didn’t blend it quite as smoothly as suggested, and just wanted to mess around with it before I make it for others on Friday. The recipe (6 bananas, 1 cup Nutella, blend, freeze) seems so simple that it’s hard to believe it will actually work. The original recipe didn’t include the weight of bananas used, so hopefully I used ones of comparable size.

I decided to blend everything with the paddle attachment for my KitchenAid stand mixer.

First I blended the bananas (6 bananas, broken in half): 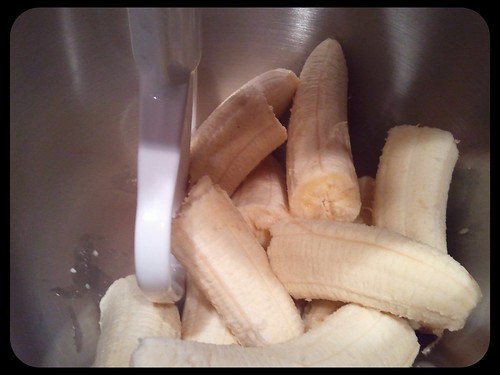 I used the lowest setting on the mixer to get them to a mashed consistency: 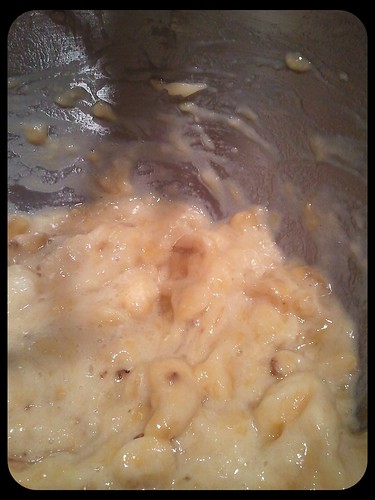 I added a cup of Nutella: 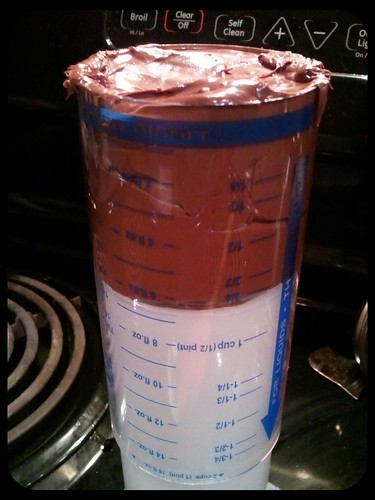 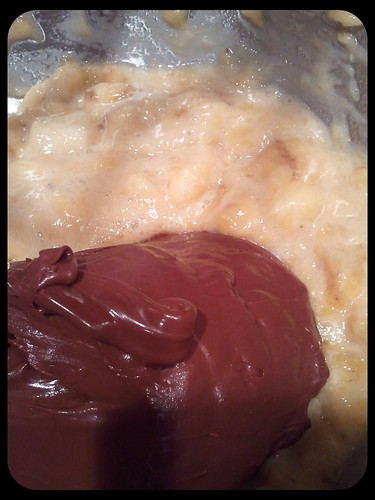 I then mixed on low again: 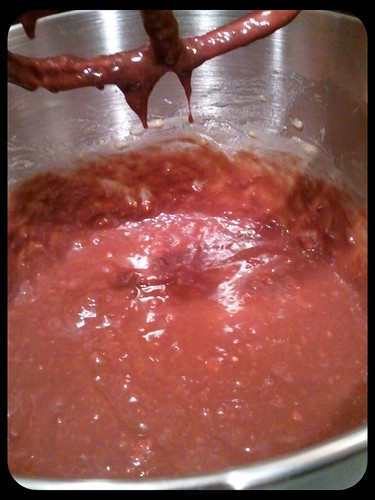 Finally, I poured the mixture into a freezer-safe container and placed it in the freezer to harden. If the texture is unsatisfactory, I plan to blend the frozen product in the blender.