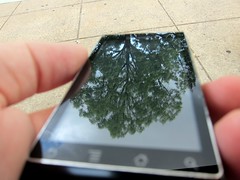 I love gadgets and technology.  If I had endless money, I would likely be guilty of overindulging in frivolous tech purchases.  To a large extent, gadgets (particularly electronics) are a guilty pleasure because I tend to worry about energy consumption and e-waste.  With this guilt in mind, I’ve been keeping my eye out for envirotech innovations.  I figured I would share some of my favorites from this month so far.

I find that many of the innovations I most appreciate are simple, and can be used often.  The bamboo bottle is one such innovation.  With all the concern about BPA, and questions about the safety about the aluminum bottles people have been using to replace plastic, glass stands alone as a decidedly safe beverage container.  The main detriment of a glass container is that it’s so fragile.  The Bamboo Bottle Company protects reusable glass bottles by encasing them in bamboo.
via Inhabitat

I also appreciate when I can improve upon technology I already use on a regular basis.  One thing I use nearly all the time is my computer.  Samsung is releasing a new computer hard drive that will consume 23% less power in standby.
via Coolest Gadgets .
When worrying about my computer’s power consumption, the hard drive isn’t what’s in the forefront of my mind, however.  It’s my understanding that monitors are the most power-hungry component of my computer.  Lately, there are “green” monitors coming out left and right, most often saving energy by utilizing LED backlighting.  The monitor that caught my eye recently is a new NEC monitor.  Saving energy through LED backlighting and the utilization of a carbon footprint meter, the NEC E231W is Energy Star 5.0 compliant.
via Hot Hardware via Slippery Brick

Sometimes it’s not just about a product I use often benefiting me, it’s about how many people a  product benefits.  Street lamps help improve visibility and safety.  The majority already save some energy by only turning on when it gets dark.  Toshiba has developed LED street lamps that not only save energy, but also maintain a high brightness and easy maintenance.
via Tech-On via Ubergizmo

Why use technology if it’s not fun?  In Golden Gate Park, San Francisco this weekend see-saws and bicycles will be available to participants.  The kinetic energy created by using the see-saws and bicycles will be used to make sno cones!  People in the San Francisco area should stop by and check this out and let me know how this is first hand.
via Inhabitat

One of the biggest detractions I hear regarding bicycle helmets is that they’re ugly.  Fortunately, Vogue is sponsoring a bike helmet design contest.  By creating a design to reflect “Eco Fashion” style by the August 23 deadline, participants could win one of 3 prizes, including having their design printed on bicycle helmets and a monetary reward.  Hopefully “stylish” helmets will encourage people to both ride their bikes more often, and to be safe while doing so.
via TreeHugger

New technology concepts come out all the time, teasing consumers and drumming up excitement.  Few actually come to fruition, much less in the form originally presented.  I would be excited to see China’s vision of future buses become a reality.  These large buses drive over car traffic to minimize congestion and provide timely public transit.  The first track for this project should be under construction before the end of this year.
via Engadget